Two weeks since it arrived I’ve finally used my Tormek T7 for the first time.

Stupidly I didn’t take a “before” photo, but it really wasn’t pretty after 2 years of use and meeting the occasional stone – the edges were rounded and heavily dented and I could have made a neater and more effective job of the lawn with a spoon!

I flattened out the worst of the lumps and dents with a file before moving to the Tormek.

As the blades are shaped I couldn’t fit any of the knife or scissor jigs, so I ended up just holding the flat side against the tool rest (part SVD-110) with the universal support in the horizontal position and the wheel rotating towards the edge.

I don’t think I would have attempted this on a “normal” grinder – if it hadn’t been for the Tormek’s slow running I can imagine the blade being flung at me with force!

I reason it doesn’t have to be a perfect edge like a chisel or plane, as even before sharpening they were “cutting” (or at least flaying!) the grass. 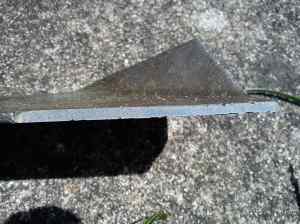 I wasn’t able to get the very worst dent out completely without grinding away lots of the blade, but I’m sure after a few more sharpenings it will be gone (assuming I don’t add to the dents that is).

I wouldn’t say I’ve got them razor sharp but they’re certainly a lot more likely to cut the lawn instead of chewing it!

Update 12/08/2012: My wife mowed the lawn yesterday while I took the kids out and we’re both very impressed with the result. No more frayed brown swirls where the grass was beaten not chopped!

Trueness of the stone

While I was sharpening the lawnmower blades I noticed the wheel seemed to “pulse” against my hand slightly so I used the truing tool (part TT-50) to correct this. 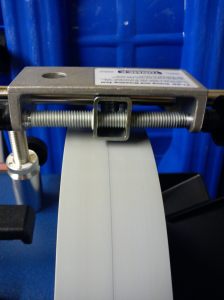 It’s simple to use and very effective (if a little boring to stand there slowing twiddling the feed knobs!)

I’ve not yet used the honing wheel as the instructions tell me to cover it in a light machine (or sewing machine) oil before applying the honing compound and I don’t have any.

I’ll either get some sewing machine oil (my wife can share it!) or I might experiment with shredder oil, as that’s all I have to hand!

Update 16/08/2012: Added some more photos and the following two sections

Two extra feet are included which stow away magnetically under the machine until they are required. 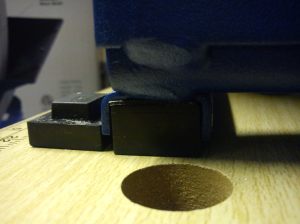 … there’s even a magnet in the water trough to trap any iron or steel filings and help keep the stone clean! 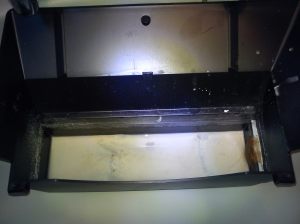 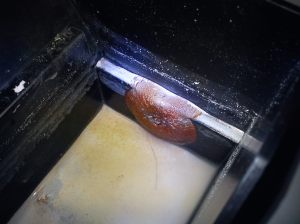 I’ve found that leaving the water trough/reservoir full means the stone wicks water up and into the MH-380 fabric machine cover, so I decided to empty it.

Having trued the stone there was quite a bit of dust in the bottom of the trough as well as the steel/iron filings seen above.

3 Responses to Christening the Tormek