After buying an assortment of old planes and old saws recently, I bought some de-greaser and rust remover from Axminster to have a go at cleaning them up.

I don’t think any of them have any value as collectors items and I’m not aiming for a freshly made shine, but I am looking to remove any rust and hopefully prevent its recurrence.

I initially bought a couple of shallow storage boxes from Wilkinson with the intention of using them for degreasing and derusting, but as they’re 16 litres and the degreaser and deruster only make a maximum of 5 litres I’ve used them as drip trays.

They have 5 “feet” moulded into the bottom, 2 on each side and one in the center and these fit nicely outside and between the jaws of one of my folding workbenches. Their corrugated lids make good draining boards, holding the components up out of any drips and both lids and boxes can “bridge” between the leg braces under my workbenches.

I decided to start on the Acorn, as it’s probably worth the least. The screws showed signs of abuse by someone with the wrong sized screwdriver, so I felt a bit less guilty about occasionally resorting to using the widest one I posess which is on my swiss army knife

The handle/tote is not just cracked – it’s broken into two pieces:

The handle bolt is noticeably bent, as is the bolt holding the knob onto the toe of the plane.

The knob is cracked as well:

I’d already given the planes a squirt with WD-40 to remove the worst of the grease they were covered in, so they didn’t take too long to degrease with an old toothbrush.

I started off with about 2 litres of water and half the rust remover in an old coke bottle, and a dash more of each in the bottom of another old coke bottle: 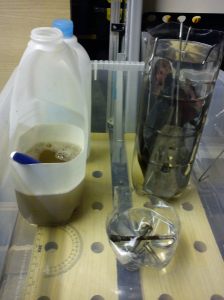 The various larger components (sole, blade, chip breaker, lever cap and frog) were suspended from bits of old wire coat hanger in the bottle, with the various screws and bolts loose in the smaller section.

The instructions say to check after an hour, but there wasn’t much progress at all and I ended up leaving the Acorn in for about 4-5 hours in the end.

After removing the parts from the rust remover I gave them a rinse and scrub with a scourer, then (as suggested in the instructions) another quick dunk in the rust remover before hanging them up to dry (in my case I’ve popped them in the airing cupoard!) 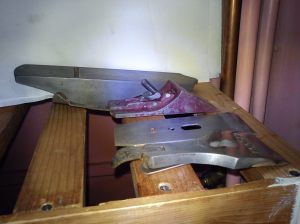 I’ve never even tried to remove rust using anything other than WD-40 and abrasive, so this was a new experience.

The rust has certainly disappeared, but I’m not sure I like the dull grey of the components so I may give them a light going over with a fine abrasive of some kind (perhaps Garryflex)

It was only when I had stripped it and saw the previous owner’s name scratched into the underside of the handle/tote that I realised that the handles are plastic! 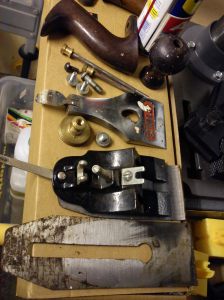 There were some wood shavings trapped under the frog:

The frog only had a little light rust, so only needed an hour in the de-ruster and I decided not to bother with the lever cap as there was no rust on it, just a variety of paint and other splatter marks.

I’ve scraped most of these off with scraps of wood and plastic, although the large white paint splodge took some of the red background of the Stanley logo with it 😦

After two hours in the de-ruster the sole was still bubbling gently but looked pretty clean, so I removed it, but the blade and chip breaker looked like they could do with another hour.

The previous owner’s name is also scratched into the chip breaker:

The markings on the blade are a little more legible now too:

I think I’ll probably put the blade and chip breaker back into the deruster tomorrow as they both still look a little rusty.

The photo below illustrates the difference between “as dipped” (far left of the blade) and “as scrubbed” (right):

The dark flat grey colour can be relieved by scrubbing and I suspect that fine abrasives would also relieve it, but I’m not that bothered with how they look as long as the rust is gone and the edge is sharp …

The last plane to be stripped and de-rusted is probably in the worst shape. 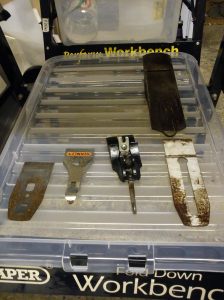 The wood of the handle/tote and knob is sound but the varnish is badly cracked.

The sole, blade and chip breaker are all pretty rusty and I think the de-rusting solution may be losing some of its potency, so I’ve left them in overnight.

All three planes have something wrong with their handles – one has a broken tote and cracked knob, another has plastic tote and knob and the other has the varnish cracking off everywhere.

I’m not yet sure what I’ll do about the broken and plastic handles. Axminster sell replacements but I’d rather not spend more on the handles than the planes themselves!

I’ll almost certainly attempt to repair and refinish the wooden handles but I think I’ll put off the decision about the plastic ones as long as possible.