Yesterday I saw a couple of posts on the local Gumtree advertising beech workbenches.

(I was sad to think another school/college had closed its Design & Technology department, but the seller later told me they’d been replaced with new ones as part of a new school being built and their transition to Academy status). 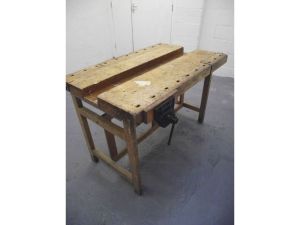 The seller wanted £70 each for the bigger ones and £60 each for the smaller, although those prices only included one side vice (he was selling them separately for £25 or would throw a second one in for an extra £20).

The listings both said they included a stool (it later transpired that he’d taken rather too many of these and was keen to get rid of them! 🙂 )

From the measurements (small 120 x 75cm, large 152 x 79cm, both 83cm high) I knew I’d definitely be able to fit the small bench in the space under the wall cupboards in the garage and that it would fit in the car, but it looked fairly light construction and I really prefered the look of the larger ones.

Given my price calculations thinking was that I should get both and either try to mate a tail vice to the larger bench or alter the larger bench’s frame to take the smaller top.

I went to see him this evening for a look, as I wasn’t sure from the measurements alone whether I’d be able to fit both in the car.

I think they’re both made by Emir, but I’ve only seen the markings on the barrel nuts of the larger bench.

All the benches had scarring from their life in a school, including saw cuts, graffiti and the obligatory chewing gum underneath!

He had a couple that were a bit (more) damaged – one small one where the wood had broken around a metal barrel nut in the stretcher and a large one where the ply side panels had been broken (I think probably because of the way they’d been stacked for transport).

I eventually agreed that if they both fit in the car I’d take them for £105. (I choose to think of this as getting the large one for £55 and the small one for £50).

They fit, along with one stool (I gave the other to a friend who lived in the same road as the seller) and I’ve now got them home.

Benches stacked in the car with the larger bench on top

I’m currently taking a break from reconstructing the smaller bench as I have to look after the children while my wife works, but I hope to get a bit more done later and will post again when I’m done.