Following on from Part 3

Despite the cold weather the glue seems to have set, so I’ve taken the myriad clamps and weights off and tidied up the glue squeeze-out with a chisel and a few rough bits on the edges with a plane.

As I clamped the ply directly there are a few marks on the surface. I could (and perhaps should) have used cauls, but I’m not making fine furniture here – it just has to be strong, stable and stand up to whatever punishment I throw at it.

I bought some M6 coach bolts and M10 bolts from Wickes a while ago, together with some nuts and washers. 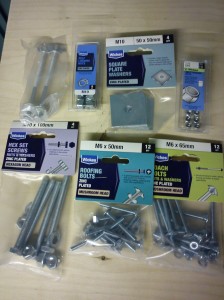 The M6 coach bolts are to hold the ply top to the base and the M10 bolts are to fix the drill press to the ply.

I put the ply on top of the stand and marked some likely bolt hole locations with an awl from underneath through the Meccano like steel frame of the base.

I then flipped the plywood and drilled some 6mm holes at the marked locations to accept the coach bolts.

(I clamped a piece of scrap under the ply while drilling, as I was drilling from the underside and didn’t want too much tear out in what would be the top – the heads of the coach bolt will hide anything minor) 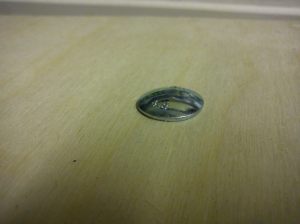 Having fixed the plywood to the metal base I then positioned the drill press centrally on the plywood and drilled some holes for the M10 bolts. 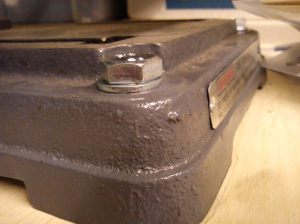 At 40kg the drill press is quite heavy and the size and shape of it make it pretty hard to carry single handed but I managed it without damaging myself or it!

The most difficult part was fine tuning the location of the drill on the plywood – it was a very fine line between too little force to break the friction and too much force causing an overshoot of the desired location!

Up top I used the round washers that came with the M10 nuts & bolts between the bolt heads and the base of the drill press.

Underneath I used some large square washers, as I thought regular sized washers might cut into the plywood.

The bench radial drill is now securely mounted for the first time since I’ve had it and the planer thicknesser is back on the folding workbench. 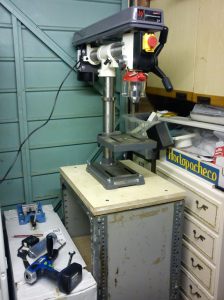 More importantly, I’ve completed a project for the first time in 2013! 🙂