I mentioned ages ago that the planer tables of my planer thicknesser are about 0.2 degrees out of alignment with one another. 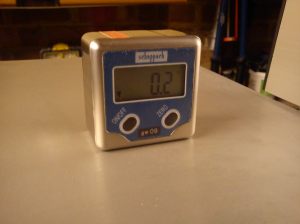 In real world terms this is less than 1mm over the 200mm width of cut (at least according to my rather rusty trigonometry!)

I’ve been wondering whether this really matters and if so whether I can do anything about it, as there doesn’t seem to be much in the way of adjustment.

I’d welcome your opinions and there’s a poll at the end of the post.

Today I’ve had a bit of a poke around and it’s not looking promising, but I think there’s a way forwards if necessary.

I figure the tables should both be aligned to the cutter block and it seems the outfeed table is pretty well aligned:

The infeed table looks (by eye) to be a bit lower on the fence side than the other: 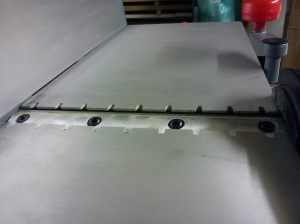 I had previously thought it was the outfeed table which was out of alignment, but a spirit level across the tables seems to back up my new theory.

More worrying is that feels like when the infeed table is fully up, the blades still kiss the spirit level on the fence side slightly.

There doesn’t seem to be much scope for adjusting the outfeed table: 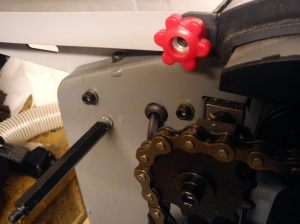 It’s bolted in four places and there’s little if any play in them, but luckily since the cutter block and outfeed are aligned that’s academic.

The infeed table has also 4 bolts, but to allow for height adjustment, rather than bolting directly onto the frame of the machine the bolts hold little square washers which slide in sloped grooves in the chassis:

I figure to raise the table on the fence side it will be necessary to somehow raise these bolts slightly:

The square washers have a round sleeve and I was hoping that they may allow for adjustment by rotating them a quarter turn but it seems not.

Update 15/01/2013: The square washer things have the following dimensions:

There’s no way I can see to shim the slots – it may be possible to file down the slots or the washers on the higher side, but this risks losing the some adjustment leeway and the ability to take fine shavings.

Unless the washers on the other side are somehow different and can be swapped, there seems little scope for adjustment without replacing them with new ones specially fabricated to take into account the particular bias of my machine …

On a more positive note, I’ve checked again and the thicknesser bed seems well aligned with the cutter block.

This means as long as I ensure the fence is at right angles to the outfeed (easier than trying to get a square on the cutter), I should be able to create square lengths of timber.