As I mentioned last week, I don’t think I’ll ever have space to array all my tools on the walls of my workshop.

That said I think there’s definitely scope for a few frequently used ones to live on the wall above my bench and I think it’d be good if certain tools could live in portable racks/tills/caddys.

As a starting point I’ve been focussing on storage for my Marples chisels. 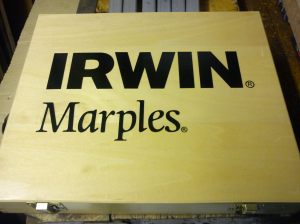 They came in a wooden box, but as there were two free that box is too full, with a couple of the smaller ones tucked under the others, so the chisels aren’t exactly ready for action.

or something like this simple rack, but then I thought it’d be nice if it could also hang on the wall so it doesn’t take up valuable shelf space.

Both the racks above don’t lend themselves easily to wall mounting, due to their wide bases. I suppose the second one could be built with legs which swivel parallel with the rack …

Given my somewhat shopaholic nature, any wall storage will need to allow for reconfiguration and expansion.

The obvious solution for wall storage would be pegboard, but it doesn’t seem to be as widely available as it used to be and since I don’t much like the way it looks I’ve been looking at alternatives.

My next thought was french cleats on MDF panels, but then I found this chisel rack while googling.

The dovetail mounting takes the idea of french cleats one step further and makes it’s harder to knock off the wall and there’s scope for customisation and expansion with the front accessory dovetail.

If I wanted to go mad, I could use that accessory dovetail to attach legs, or replicate it at the back for legs front and back, or even underneath if I wanted to attach a base.

I think it’s a great solution, but it may be overkill …