Although I took delivery of my Charnwood W730 bandsaw back in September I must confess I’ve barely used it until today, when I had a play and did a few test cuts in scrap wood.

The machine was built by Homewood Ltd and delivered with the supplied blade already fitted.

Having finally got round to watching the first couple of DVDs in Steve Maskery’sWorkshop Essentials I thought I’d have a look at how it’s set up, as the blade guides look a little crooked and the bearings only touch the blade on one side.

There’s also a slight knocking sound but I think this is probably just the weld, which looks a little rough: 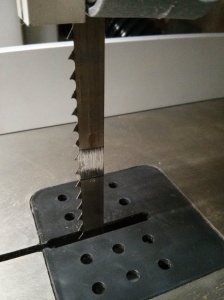 The blade guides have three bearings, one either side of the blade and one behind it.

Unlike some other saws the back of the blade bears on the rim rather than the side face of the back bearing.

All three bearings in each guide assembly are mounted eccentrically so they can be adjusted towards or away from the blade, however the casting that the side bearings sit in is slightly too small and the bearing jams against the inside in certain positions. 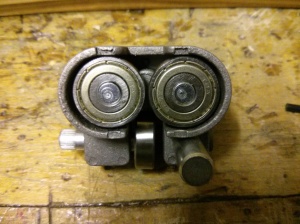 It is possible to remove the side bearings and rotate their mountings through 180 degrees so that the other half of their adjustment range can be used. 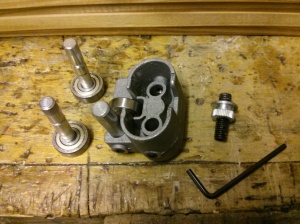 The rear bearing seems pretty skewed no matter what you do to it, but I don’t think this will matter much, as long as it’s free to spin. 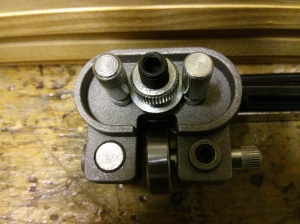 I would have liked to continue fiddling about with the guides, as I think I’m just about getting the hang of how to get them where they need to be, but I had to stop and go to my mother-in-law’s to eat some of my wife’s home cooked lasagne (it’s a hard life! 🙂 )