[A combination of health problems and bereavement have conspired against me getting any time in the workshop (or even at car boot sales! 😦 ) but here’s a post I’ve been writing for a while]

I suspect I’m not alone in thinking that given the time and money I’ve spent building up my workshop over again I might do things differently.

My workshop started taking shape in January 2012 and has steadily improved since then.

There’s still a long way to go, and I fear one of the next steps will be to empty it, insulate & rewire it and start laying it out again from scratch.

It’s unrealistic to think that if I had my time over again I could do much different – I could perhaps concentrated on emptying out the garage a bit more before I started filling it with tools, but this would have meant I had to wait much longer to have something I could call a workshop and I may have lost motivation/interest …

The most realistic things I’d try to do given my time over again is to get a proper workbench and vice into the workshop a lot earlier than I did and maybe paint the walls. 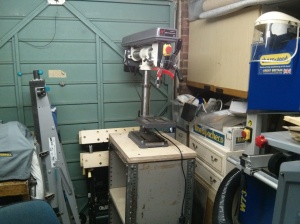 The order I got my machinery in was:

Until recently I’d used very little of it (indeed the Lathe is still in its box and I have no turning tools yet), but I don’t think I’ve made any bad choices.

I’ve arguably over spent on some (Tormek and Jet) and underspent on others (SIP and Charnwood), but I think that reflects the way I see myself going in future.

I don’t think I’d be any better off (certainly not in a financial sense!) if I’d bought the other two machines I was considering (the Axminster AW106PT2 and the Jet JWBS 14Q).

I’d certainly have less room in my single garage workshop with a floor standing planer thicknesser, and at 300m³/hr my vacuum extractor would be massively underpowered for it too.

I might change the order of purchases, given my time over again – perhaps I’d buy a bandsaw first, or maybe I could have jumped straight into woodturning and bought a lathe first, but I don’t think I’d end up with a different set of machines in the end.

The big question is whether I should have bought the machines so long before I actually needed them for a project – I probably shouldn’t.

You may be picking up a theme here, but I also bought a lot of tools – both new and used – before starting a single project, and I continue to add.

I think this says a lot about the way I think – when I started doing DIY projects I was often limited by a lack of the correct tools and the quality of the projects I was doing suffered as a result.

At the time I was also limited by lack of funds and some of my motivation for stocking up in this way is to stockpile tools and materials against a return to limited resources and more free time (either through unemployment or eventual retirement).

There’s also an element of the collector in me – having bought a couple of Stanley Bailey planes in a bric-a-brac shop I suddenly wanted “a set” from No.3 to No. 7 at least.

Again I should really only have bought tools as I needed them.

I don’t want to  create yet another list of “a dozen indispensable hand tools”, but I should have concentrated on covering the following bases earlier than I did: 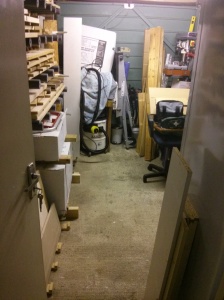 The only projects I’ve really needed to do have been the bi-fold door and the router table (in order to make some replacement tongue & groove floorboards for my house).

I think I should definitely have started working on some simpler projects earlier and got a few successes under my belt before I spent money on tools for more advanced projects.

The workshop projects have given me a sense of achievement and helped me unwind, which is my main aim with this hobby.

I’ve also got something tangible that I can look at in 5-10 years time and think “I did that” – something that is largely lacking from my day job.

2 Responses to Thoughts on order