I’ve been wanting to buy some tools and spares to repair the various saws I bought from bric-a-brac shops and car boot sales last year.

I’ve tried out some of the back saws and whilst most of them cut a lovely thin kerf, none of them feel particularly sharp.

Some of the handles are a bit wobbly and the Spear and Jackson has a couple of broken saw nuts, which probably doesn’t help:

I was able to remove the broken nuts by knocking them round with a mallet and one of the screwdrivers I got from the car boot sale at the weekend (they’re so chewed up that I need to re-grind them, so in the mean time they’re fair game for some abuse).

I used an offcut in the vice of my bench to stop the saw slipping about too much.

With the tote removed I could see that the holes in the blade are rather elongated:

The damaged nuts are silver coloured and I only have brass or brass plated ones to replace them with, so the one unbroken screw will stay with the SJ roundel. 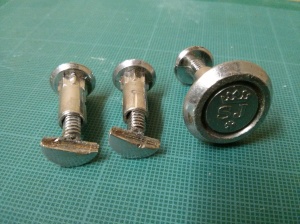 Neither of the new saw nut types I’ve bought from Workshop Heaven are a great match for the existing pattern, so I’ve used the brass plated ones for now (second from right in the below picture).

The female side of these saw nuts extends through the blade and about 2mm beyond into the tote the other side, which will hopefully help stop the elongated screw holes from causing wobbling. 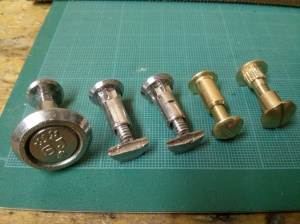 They’re not a bad fit and the tote seems a lot more firmly mounted now.

The mixture of brass and silver doesn’t look too horrible, but I’ll look out for some silver coloured replacements all the same … 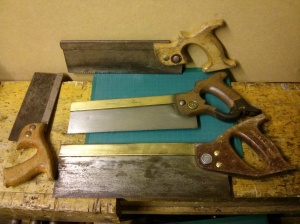 I’ll probably do a batch of derusting in the near future and will include some of my “collection” of back saws when I do.

Once that’s done I’ll have a crack at sharpening …